The Garden Project grew strong with 35 gardens and 4 of the gardeners were provided scholarships to college! Thank you for your support. 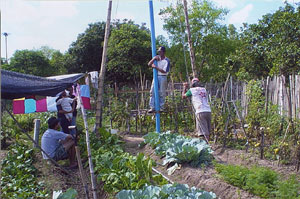 The article below was written by returned Peace Corps Volunteer, Gretchen Oat in 2004. Both Gretchen and Will Clark were instrumental in establishing the Urban Garden Network, Red de Juerta, for the Sustainable Living Foundation in 2003. Their volunteer time in Pilar over lapped by three months.

Since Gretchen wrote this article, the Garden Project expanded to include: 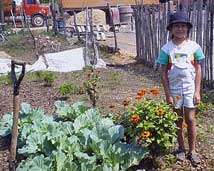 Walking through the barrios outside the city of Pilar, Paraguay, patches of vegetable gardens appear sparse against the larger expanses of dirt and urban dwellings. Taking a closer look, one finds a rampant blend of green life ranging from the standard three sisters (corn, beans, squash) to an array of sub-tropical oddities: passionfruit, hanging air potatoes, yva puru, nanga priri. There’s nothing more exciting than exploring these glimpses of paradise. In conversation with the families responsible for the care of these pieces of tierra, the same themes always seem to unearth themselves. The garden is a great way for obtaining vegetables for household consumption. The excess produce can be sold within the neighborhood barrio or brought to market in the city center. It seems like such common sense. Looking around, however, it is easily revealed: common sense is not common practice. In truth, many people go days without eating and have a tendency to center their diet around oil, salt and flour.

The city of Pilar is located in the southwest corner of Paraguay, just north of the confluence of the Rio Paraguay and the Rio Parana. In letters home, I would describe the land as a hybrid of the Florida Everglades and the Kansas prairieland. The people, a mix of Guarani-speaking campesinos and an urbanized elite, were some of the friendliest and most gentle folk I’ve ever met. Pilar, a relatively progressive place, is home to several universities and centers for advanced training. Most every weeknight evening, the streets are teaming with youth and young adults as they make their way to school. Classes are held at night, as most students cannot afford to dedicate themselves full-time to their studies and maintain a job during the day. For many, the task of finding a job to cover the basic costs of living, let alone the univerity fees, proves to be difficult, given the extremely challenging economic situation. How is it that such a large number of people are on the borders of severe malnutrition, in such a seemingly prosperous town?

The Urban Garden Network — Red de Huerta — was formed in the barrios of Ytororo, San Roque, San Lorenzo and Villa Parque, within the city of Pilar in the southern summer of 2003 by regional Peace Corps Volunteers and several youth. The program was created with several aims in mind. We hoped to address the immediate need for food security by achieving a higher degree of self-sufficiency while also improving nutrition by incorporating locally grown produce into the diet. In establishing a network between gardens and gardeners, we aspired to develop the ability to communicate and a sense of sharing amongst the participants as well as to promote experimentation with different gardening techniques. 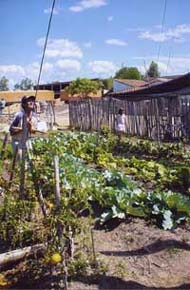 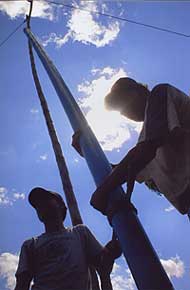 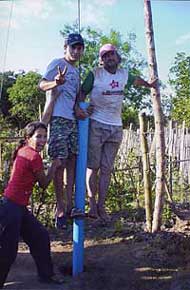 Each youth was responsible for maintaining their own garden and a journal of their garden-related activities. This involved: constructing fencing, building up garden beds, planting seed starter boxes, maintaining the garden once it has been planted, harvesting and using the vegetables, seed saving and beginning compost piles. Further, the youth were also encouraged to share their knowledge and enthusiasm with interested families, assisting them with their gardens. In exchange for their continued participation, each youth was awarded a monthly educational stipend. In this way, the costs for obtaining high education were alleviated.

If you are interested in finding out more about this program or have your insights to share about urban gardening, write to: